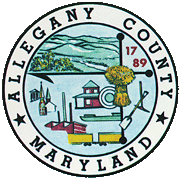 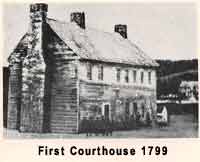 Photo from The County Courthouses
and Records of Maryland, Part One:
The Courthouses, Annapolis:The Hall
of Records Commission of the State
of Maryland, 1960


The Allegany County courthouse was constructed from an act of the General Assembly of 1789. The part of Washington County westward of Sideling Hill Creek became Allegany County. The name Allegany is derived from the indian word "Oolikhanna" meaning beautiful stream.

Thirty years later the General Assembly granted to the County Commissioners authority to issue bonds in the sum of $75,000.00 for enlarging and remodeling the courthouse and for building a new jail. The courthouse was enlarged, along with the Clerk of Court and Register of Wills offices. In addition, the appearance of the building, both inside and out, was beautified.

On January 5, 1893 the Courthouse caught fire and unfortunately the firefighters of Cumberland were unable to save the building, only the vaults of the Clerk of Court and Registers of wills survived.

Work began almost right away to build a new courthouse, which is the one in present day use. During this time the court held business in city hall. The Courthouse was constructed for a total cost of $97,000.00. The Courthouse is situated on the site of the old Fort Cumberland, overlooking the Potomac on one side and Wills Creek on the other. The Courthouse has changed little since its original construction. The building with its square steepled tower is the centerpiece of the Cumberland Historical District.