Welcome to the Appellate Court of Maryland

The Appellate Court of Maryland is Maryland’s intermediate appellate court. The Court considers appeals from almost any case that originates in a circuit court or an orphans’ court in Maryland. Parties who are unsuccessful in the Appellate Court may be able to seek further review in the Supreme Court, Maryland’s highest court. 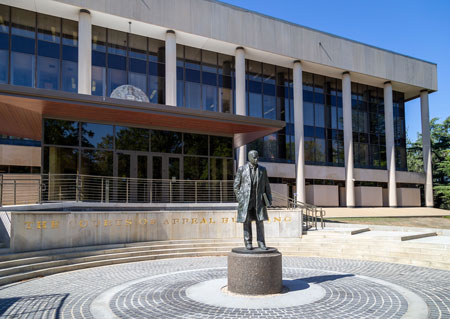 The Court traces its existence to 1966, when a constitutional amendment authorized the Maryland General Assembly to create an intermediate appellate court. When it was originally created, its jurisdiction was limited to certain types of cases—initially, only criminal cases. That jurisdiction expanded to the point that the Court is now more accurately described as an appellate court of general jurisdiction.

The Court now consists of fifteen active judges, at least one of whom comes from each of the State’s seven geographic appellate circuits. All of the judges are appointed by the Governor, confirmed by the Maryland Senate, and then must stand for a retention election by the voters every ten years. Judges may serve until age 70. Senior Judges who have been authorized by the Supreme Court of Maryland to continue to serve may also hear and decide cases alongside the active judges.

All appeals filed in the Appellate Court of Maryland are governed by Title 8 and Title 20, pertaining to electronic filing over MDEC, of the Maryland Rules. After appeals are fully briefed, they are considered by panels of three judges. In all cases, the judges consider briefs filed by the parties and the record developed in the trial court. In some cases, the Court also holds oral argument, generally in the Courts of Appeal Building in Annapolis on one of the first eight business days of a month (directions can be found here). The Court’s schedule is posted here. If oral argument is scheduled, the identity of the members of the panel is revealed approximately seven-to-ten days in advance of the date of the argument.

In most cases, one of the three members of the panel assigned to the case will author a written opinion deciding the appeal.  One or both of the other judges on the panel may also write a separate opinion concurring in or dissenting from the majority opinion.  In rare cases, the entire Court will sit to review a case.

All of the Court’s opinions are issued in writing.  Some are also “reported,” which means that they are published in the bound volumes of the Maryland Appellate Reporter and, unless overturned by the Supreme Court, serve as precedent that binds the State’s trial courts.  Opinions that are unreported are binding only on the parties to that appeal.  Anyone, even a nonparty, can ask the Court to report an opinion that is initially unreported, as long as they do so before the Court issues its mandate (for the timing of the mandate, see Rule 8-606(b)).  All opinions, both reported and unreported, are available on this website.

Each active judge of the Court maintains a chambers with staff who work directly for that judge.  In addition, the Court is supported by its Clerk’s Office, Staff Attorneys Office, and Alternative Dispute Resolution Division.

The Clerk of the Appellate Court of Maryland is responsible for receiving and keeping all papers filed with the Court, including briefs, motions, and the trial court records.  The Clerk’s Office is located on the Second Floor of the Courts of Appeal Building.  All communications with the Court should come through the Clerk’s Office.  Litigants and attorneys should not attempt to contact judges or their chambers staff directly, either before or after an opinion is issued.

The Court’s Alternative Dispute Resolution Division reviews most civil appeals and selects those that are good candidates for possible resolution through mediation.  For the cases selected, the Division then uses highly trained mediators to facilitate the parties’ resolution of their disputes.  Cases not resolved through this process are placed back into the normal appellate process.

The Court is committed to providing access to justice to all who come before it. To that end, the Court has created its Guide for Self-Representation, which can help self-represented litigants in preparing their briefs and other papers.

E-filing in the Appellate Court of Maryland